Oops. I’ve been meaning to tell all the magical things that are happening everyday over here, and yet it has been a week already since the last post. Oh well.

This morning I heard Natanael say “Bom dia!” for the first time. He was yelling it to some young guy who was arriving on his bike at church. The later whom didn’t hear or didn’t care, but didn’t reply (which is a rare thing in Brazil — everyone likes to talk. a. lot. to strangers). This made me happy-sad for a moment. Some people just don’t know what this means to us! 🙂

Elias and Natanael are both doing a lot of progress on the verbal front. Sure they must still be considered “speech delayed” for 2-and-a-half years olds, but they are learning two languages at a time. Right now Natanael likes to say the words that he knows in French and Portuguese right after each other “voitu’e-carro”, “poule-galinha”, “poisson-peixe”, “singe-macaco” (my favorite ;)) and repeats them many, many times in a row… Repetition is the most basic learning technique, they say. Elias sounds a bit less like a broken record. He does know how to say “não pode!” (can’t do) because he’s heard it so many time said to him (they both play a lot with the twin girls of the other pastor).

Speaking of being polyglot; it’s great and all, but it also generates some irritating comments. For example, on FB I am constantly reminded by the monolingual family members or friends that I’m not writing in their language. Yes, guess what, I have other things to do than to translate every status that crosses my mind in 3 or 4 languages… (Plus there is this thing called “Bing” translator, it’s not great but some friends are using it with surprisingly good results). Sometimes I say something in French (for a more French related thing) and sometimes I say something in English (for teasing my English Canadian friends about the warm weather here, for example), and lately, to add to the mix, I do try to say stuff in Portuguese too (to integrate my new Brazilian friends into my head). What a relief to come back to this blog and be able to share my thought in whichever language I choose.

Changing subject, let me tell you now how I solved a mystery at the beginning of last week.

While I was buying some oranges at the feira (market) some friendly man (everybody is friendly here) came to the stand and asked where I was from, to which I replied that I’m French (because that’s just shorter than telling all my life story). The orange seller naturally joined the conversation adding that she thought I was German because she saw me speaking to dona *** (an old lady from church who sells plants) who is “German”. There are a lot of people of German origin in the area, most of them immigrated from the south of Brazil 40 years ago (the town where we lived was founded in the 70’s) and used to speak nothing else than a dialect called pomerano at home. So when they say “she or he speaks German”, they actually mean pomerano. A couple of old ladies from church are actually very happy that I speak German but we rarely strike a very long conversation because a) pomerano is not the Hoch Deutsch (High-German) that I’ve learned  b) my German is rusty c) old ladies pronunciation, plus the Brazilian accent, makes it extra hard for me to understand them.

I must learn Portuguese (stat!) people, not pomerano.

So, back to my orange story, the friendly guy then asked me if I knew that fruit (showing me). He said the name, which I forgot right away, and threw it in the same bag of the oranges! “You have to try it! It’s very exotic, you’ll see! I love it. Welcome to Brazil!”

I came back home with this mystery fruit among the oranges and asked my very own Brazilian hubby *swoon* if he knew what it was. He had never seen this before! It smelled strange (like dried figs, but stronger), looked strange, and we had no idea how to eat it. So I posted the picture on FB to ask the local new friends. 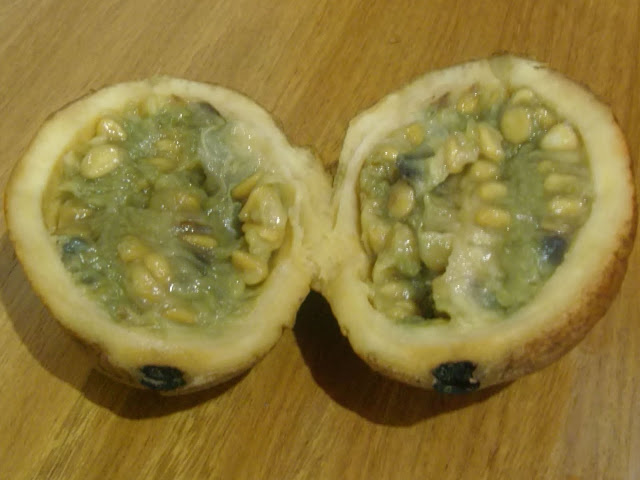 Some were mistaken and said maracujá (passion fruit), I guess it does look a bit similar, but most informed us that it’s a jenipapo. D thought it stank too much to even try ❗ I made myself some juice with it, as I would with a maracujá, and really enjoyed it. Yum. On top of it all, it seems we have a jenipapo tree in our garden. And it is flowering right now! Yeay!

6 comentários sobre “Of fruits and languages”